Human beings have an internal urge to seek their purpose in life. Tarot reading can help people gain clarity and a new perspective on life. A one-card tarot reading is perfect for those who want concise but compelling insights.

A one-card tarot reading is a simple divination practice that can help a person have a deeper understanding of their current state, be more aware of their surroundings, and make sound decisions. This single card tarot provides straightforward answers to any question one has about any aspect of life. 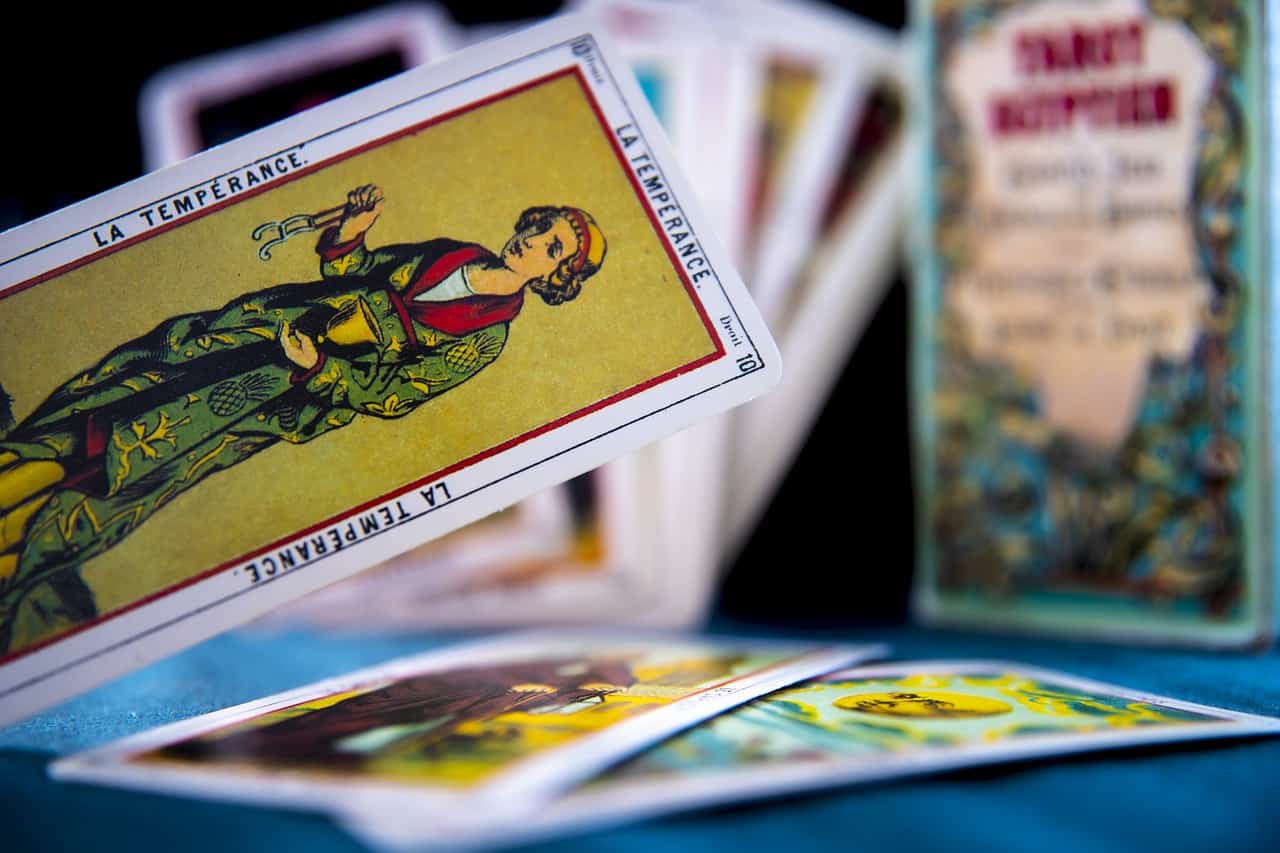 A one-card tarot reading is usually the type of reading that people use on the daily. It can also be used on a particular day of the week or special occasions like a birthday. It’s a great way to get direct answers to questions about life, love, wealth, career, health, or relationships.

There are pros and cons to using a one-card tarot draw. The advantage of one-card readings is that, in essence, it will provide the seeker powerful, straight-to-the-point answers. The card will tell the seeker what they need to hear, and the message will be clear and concise.

The only downside of a one-card tarot draw is that the answer might be unbalanced, given that no other card can support it by giving more insight.

One-card tarot readings aren’t for people who have questions that need complex and elaborate insights, but it’s perfect for those who need quick insights or succinct answers with profound yet straightforward interpretations. 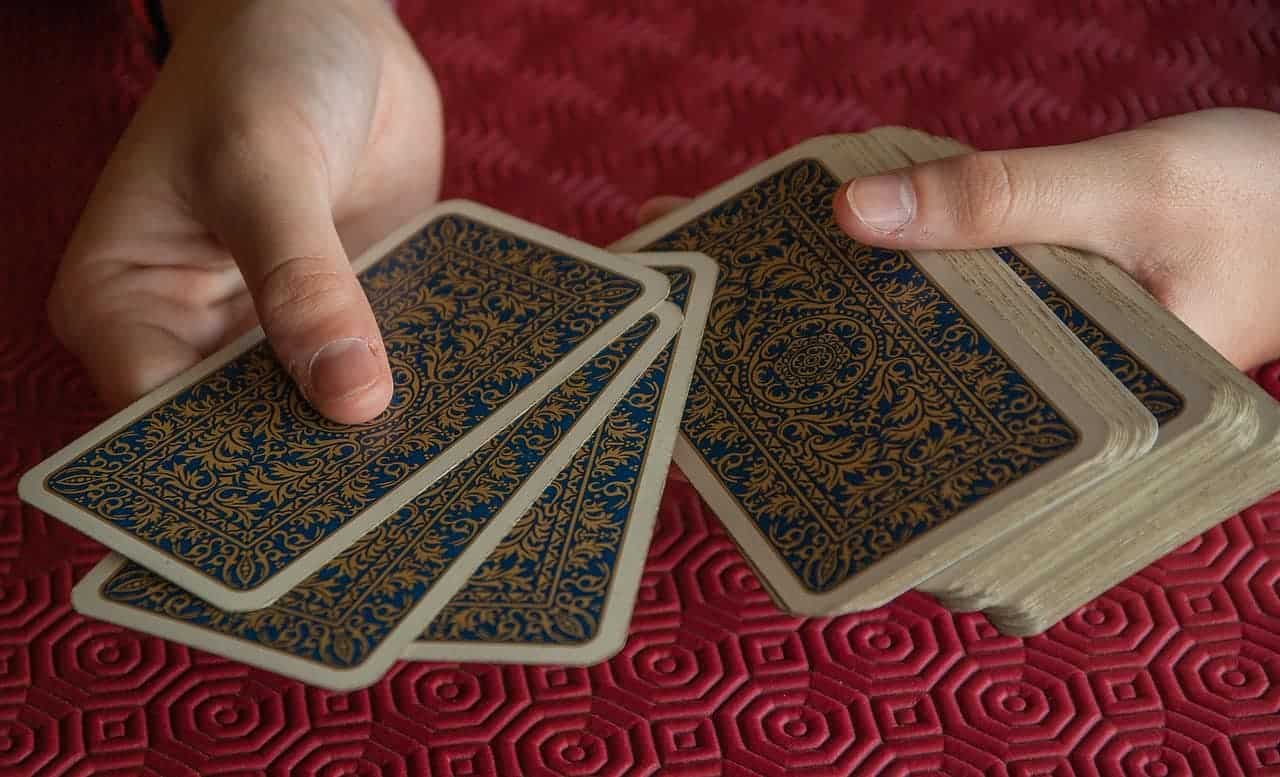 As mentioned above, a one-card tarot draw is usually used for daily readings. In this reading, the seeker selects a single card that will become the theme of their day. Most beginners in tarot use this type of reading when learning the cards for the first time.

Because of its brevity, the single card drawn will be memorable to the seeker throughout the day. The purpose of the daily reading is to heighten the seeker’s awareness as they carry the energy of the card with them as they go along their day.

Before drawing a card, the seeker must lay some simple ground rules like letting one’s intuition take over even before seeing a card. The seeker should also ask a clear, specific, and heartfelt question to get a concise answer. Lastly, it helps if the seeker meditates on the card they pulled.

The absolute beauty of tarot is that each card has layers of meaning. The richness of the symbolism and story behind each imagery craft people’s inner and outer realities. Below are some ways the seeker can consider when interpreting the cards. 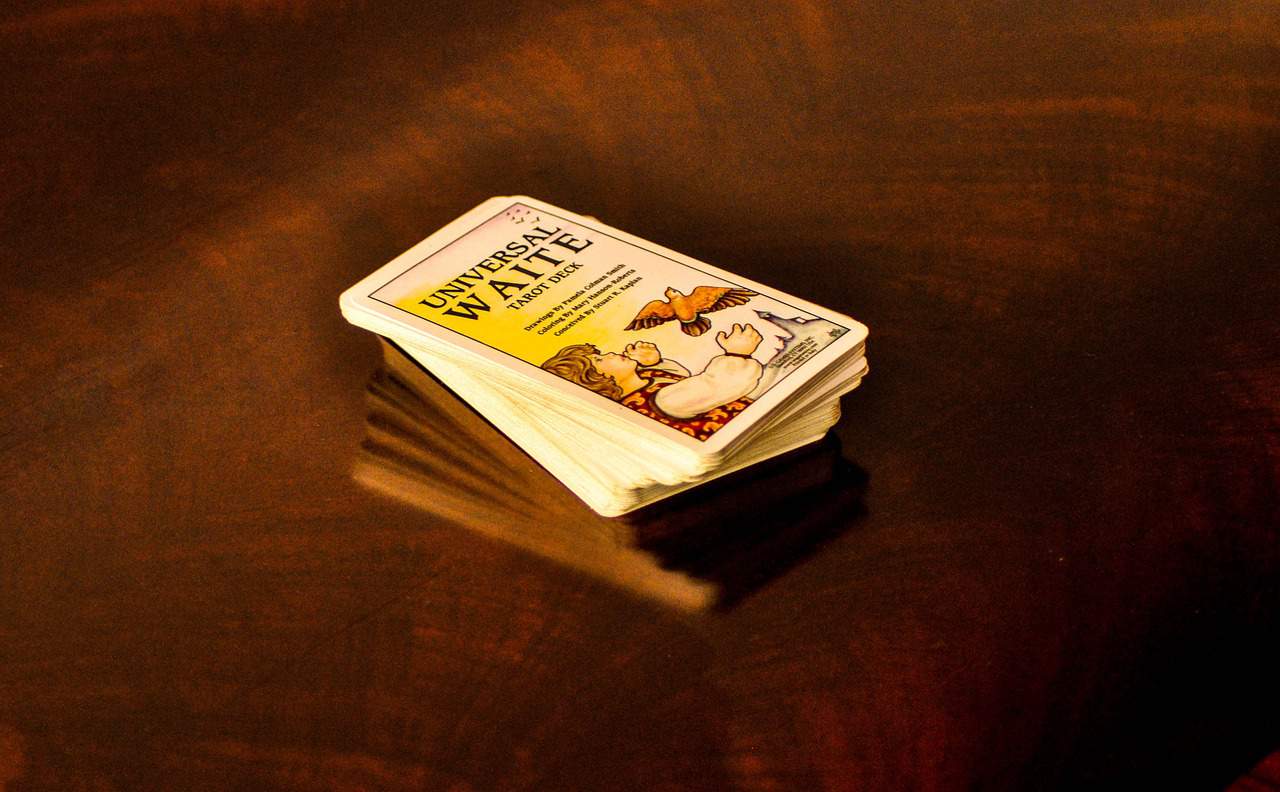 The traditional interpretation of a card is its widely accepted meaning or the set of meanings that have been established over the years.

The Six of Wands, for example, pertains to triumph, acclaim, and pride. Generally, it means achieving success, being acknowledged, and enjoying healthy self-esteem.

The seeker can focus on their intuitive interpretation of the card. This will be based on first impressions and feelings toward the card.

This type of interpretation is the seeker’s unique response to a card based on their personality and current state of mind. This may come in a flash of knowledge or a mental image.

The Activity in the Card

The Six of Wands depicts a man wearing a victory wreath around his head and holding a staff adorned with a laurel crown while riding a horse through a crowd of cheering people. In a reading, this means the seeker can finally receive the honor and award they deserve.

The Symbolism Behind the Image

Look at the card and reflect on what stands out the most in the image. In the Six of Wands, the horse might be interpreted as a symbol for strength and a successful adventure.

The cheering crowd represents praise from the public. The staff adorned with a laurel crown held upright emphasizes success and achievement. 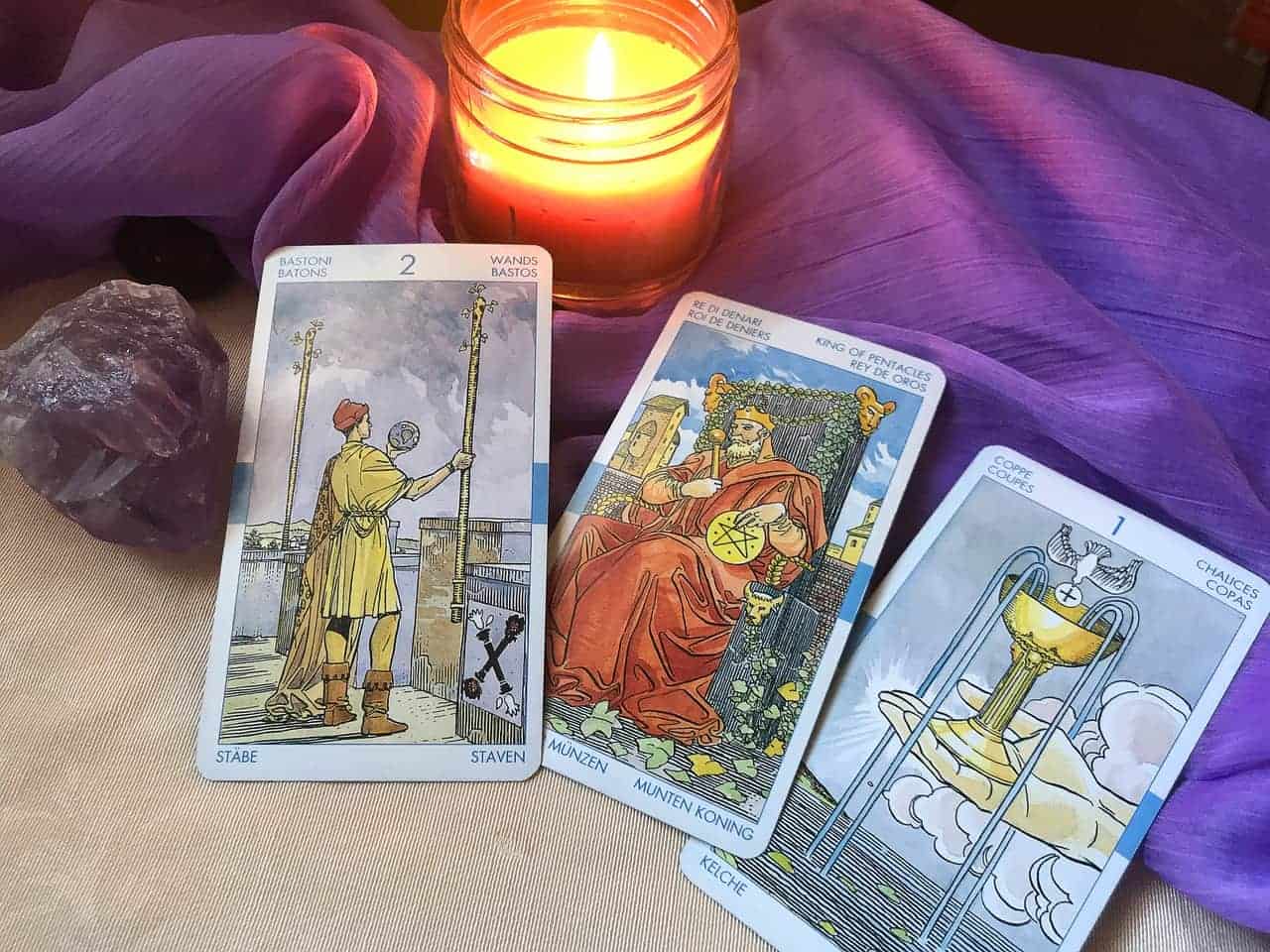 In each of the four suits, there are cards numbered from one (ace) to 10. Below are some keywords for each card. 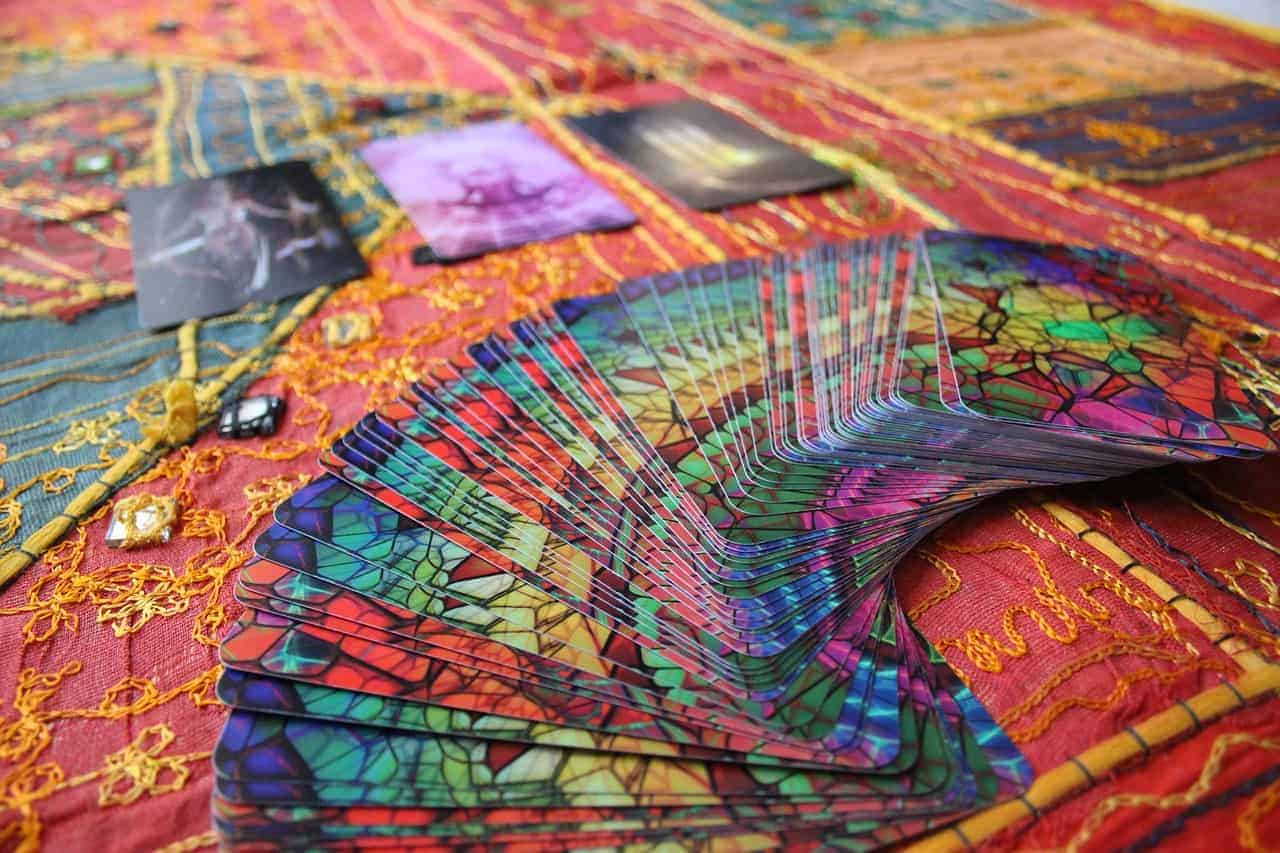 Like any other divination tool, the tarot is comprised of symbols and patterns that have definite meanings. The tarot is believed to be the mirror of a person’s soul.

Tarot reading involves a seeker asking a question and then shuffling and cutting the deck afterward. The reader will then lay out the chosen cards in a pattern called a spread. There are different types of spreads for various intentions, and each position in the spread has a meaning.

Every step in a tarot reading, from shuffling, cutting, and drawing the cards to laying them out in a spread, has a meaning. All these contribute to the overall message of the reading.

The reader is responsible for weaving all the meanings into a succinct message that will shed light on the seeker’s question.

The tarot is a powerful divination tool. This power comes from the reader’s ability to combine the personal and the universal.

The ‘personal’ roots from the imagery and symbolism in the tarot cards which tap into a person’s unconscious, the deep level of memory and awareness residing within individuals.

The ‘universal,’ on the other hand, proceeds from a collective component. The imagery in the tarot cards reflects the human condition. In essence, the tarot is a system of archetypes reflecting basic patterns of human thought and emotion.

A standard tarot deck consists of 78 cards that are divided into two groups: the major arcana and the minor arcana.

The major arcana is a set of 22 cards that symbolizes the universal aspect of human experience. The minor arcana is composed of 56 cards, each representing the concerns and emotions that make up daily life.

Within the 56 minor arcana cards, there are 16 court cards divided into four suits: the Wands, the Cups, the Swords, and the Pentacles (or Coins). Each of these suits is associated with a particular approach in life.

The Wands are for creativity and action, the Cups for emotions and spiritual experience, the Swords for intellect and reason, and the Pentacles for practicality and material concerns.

Origins of the Tarot 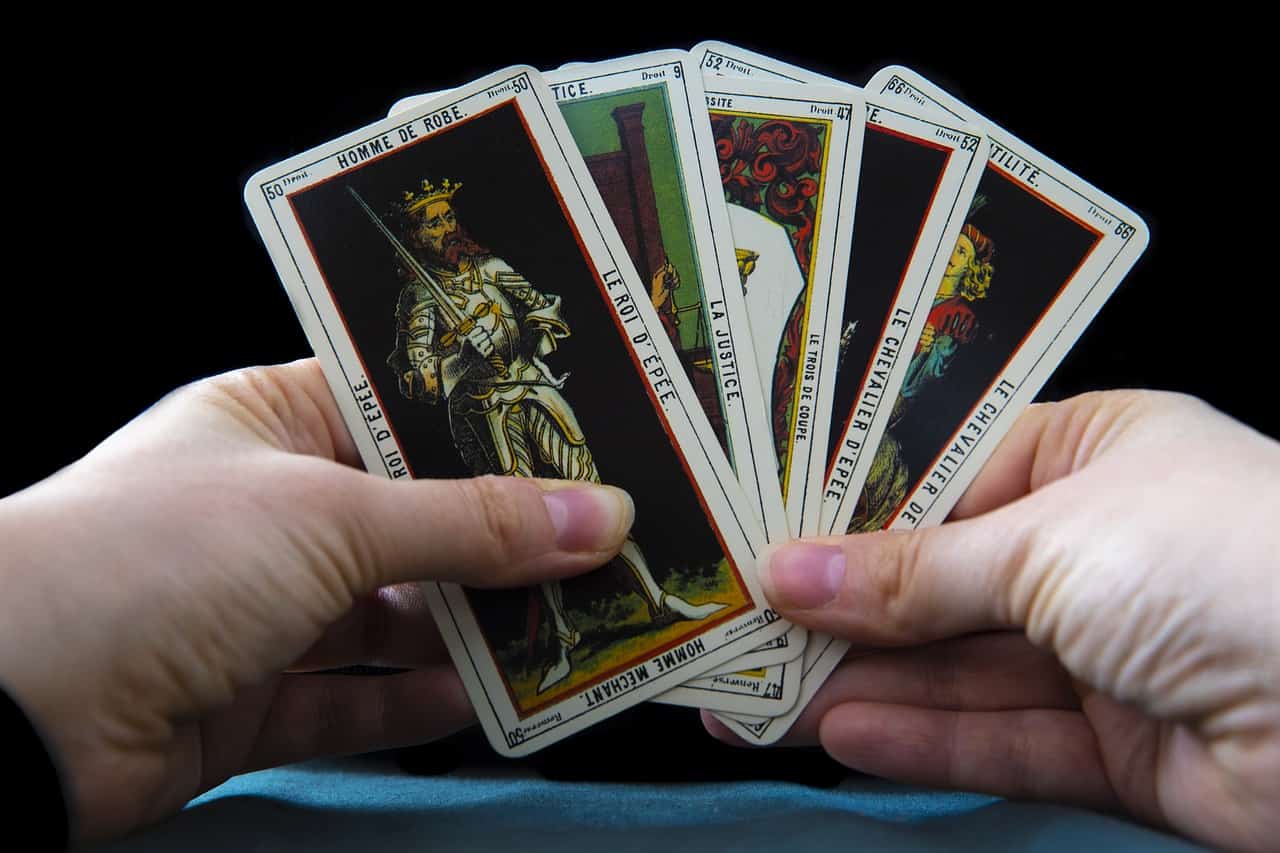 The exact origin of the tarot is unknown until today. The earliest record of it in history dates back during the late 14th or early 15th century in northern Italy. It was said that the cards were initially used by nobles to play a game similar to bridge called tarocchi .

Eventually, influential scholars of the occult became fascinated with the tarot. They surmised that the tarot is more powerful than it seems. They revealed that the tarot cards have a connection with ancient Egyptian lore, the Kabbalah, Hermetic philosophy, alchemy, and other mystical systems.

A one-card tarot reading provides specific guidance and straightforward answers. You can do a one-card tarot draw on your own. If you don’t have the means to do so, professional psychics on this website who specialize in tarot readings can help you find enlightenment.

In choosing a great tarot reader, one should find a personal connection with them. Also, read testimonials, feedback, and reviews about them. If you can, ask for a sample tarot reading.

If purchasing a one-card tarot reading, find out what you’re paying for. Ask the tarot reader if you’ll get a couple of keywords or a decent reading on a single-card draw.